Séamus Martin was born in 1942 in Dublin and worked for six years as Irish Times correspondent in Russia. He was the only Irish journalist to witness at first hand the fall of the Soviet Union in 1991. He also covered events in the October of 1993, both Chechen wars, the explosions of apartment buildings in Moscow in 1999, presidential elections and many more news affairs. in his weekly Moscow Letter made Irish readers aware of general life in Russia. He is now retired.

“I first went to Russia in 1974 with a group of journalists who were inspecting sporting facilities following Moscow’s application to hold the Olympic Games in 1980. We spent some time in Moscow but also visited Kiev and Tbilisi. This visit aroused my interest in Russia’s culture so when the position of Moscow correspondent arose in 1991 I applied immediately and was chosen after a series of interviews.

When I arrived in Moscow in June 1991 the Soviet Union was still 100 per cent intact. Within six months it was no more. This was the busiest time in my long career in journalism. One small incident puts it into perspective. Reuters News Agency used to list the 20 most important news stories in the world each morning. On several occasions in those early months of mine all 20 were date-lined from Moscow.

“I lived, initially, on the 17th floor of an appalling apartment block on Taganskaya Ploshchad. The electricity would cut off just as I was about to send my reports by telex. The lifts would stop working usually when I arrived with my week’s shopping which I would then have to lug all the way to the top of the building.

“Then the burglars went into action. My apartment was broken into three times. It was time to leave. Things improved immensely after I moved to a diplopmatic campus on Bolshaya Spasskaya Ulitsa near the Perekop cinema and behind the Sklifosovskiy Hospital. Life became easier and I gradually grew to love Russia and its people. I travelled a lot in European Russia, in Siberia and in the former Soviet Republics, and I return as often as I can.”

Seamus continues to maintain links between Russia and Ireland. He is quite often published in Irish media, making sure to give the Russian view as well as that of Russia’s opponents. His opinion column on the Russian – Georgian conflict in 2008 firmly challenged prevailing views of the Irish public. Martin went back to Russia in August 2012 to write about the 20th anniversary of the failed putsch that led to the dissolution of the USSR. He covered the Duma elections in December 2011 and the Presidential elections in March 2012 for The Irish Times. His radio documentary series Death of an Empire was broadcast on RTE Radio One in January and February 2012 and can be heard over the internet as a podcast.

He first became aware of the Soviet Union as a child. “I was a small kid and living in Derry (Northern Ireland) with my family. Princess Elizabeth, later Queen Elizabeth II, visited Derry and the two communities marked the occasion in different ways. Unionists flew the British flag, the Union Jack, Catholics closed the curtains on their windows. There was one exception. A neighbour flew the Red Flag of the Soviet Union from his house. The police came and asked him to take it down. He refused and told them that but for those who fought under that flag, Princess Elisabeth would not have survived.”

From that day on did not forget the role of the Soviet Union in the victory over Hitler. He is still impressed by how young couples leave flowers to the Unknown Soldier memorial in Alexandrovsky Garden on their wedding day and says he learned more about the war from conversations with the daughters of Marshall Georgy Zhukov in Moscow. 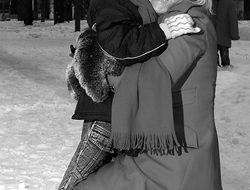